Vivaldi mobile is coming to Android, and it’s worth the wait. 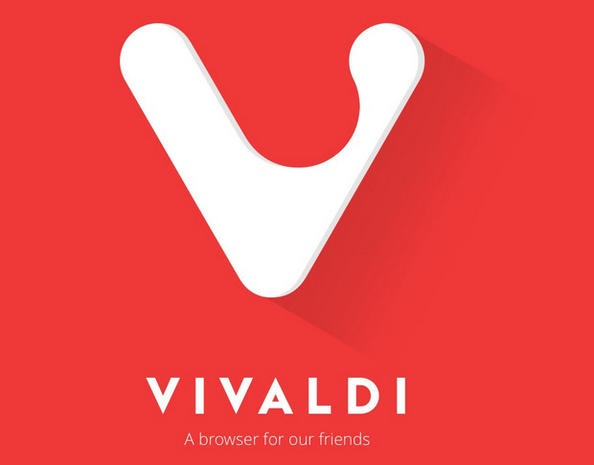 Vivaldi has been slowly continuing to rise in popularity on the desktop—with good reason. This particular alternative browser is just the right mix of features, speed, and reliability. Because the browser-that-could has gained such a strong following, it makes perfect sense that they’d develop a mobile option. And that’s just what they’ve done.

The Vivaldi mobile browser for Android is still in beta, and I was given an early opportunity to kick the tires. Almost immediately I came to the conclusion that the mobile version was just as good as the desktop version, though it doesn’t include nearly the feature set.

This browser is fast, stable, and has just enough tricks up its sleeve to set it apart. In fact, the beta version of Vivaldi is so good, I’ve already adopted it as my default Android browser.

That’s saying something for a beta.

SEE: IT pro’s guide to the evolution and impact of 5G technology (TechRepublic download)

What features are included in the Vivaldi mobile browser?

Vivaldi has a few features that make it stand out above the competition. Some of the features are obvious, such as the Speed Dial tab. This tab works in similar fashion as the desktop version of the browser. Open a new tab to view your configured Speed Dial tiles (Figure A). 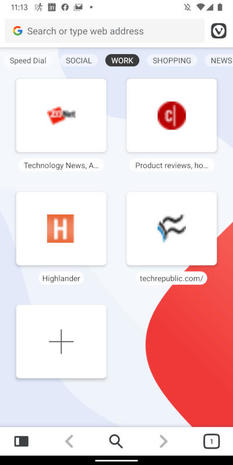 The one caveat to the Speed Dial tiles is that on the mobile version you cannot remove or edit tiles. You can add new tiles, but in order to edit/remove, you must go to the desktop version, take care of the tile management, and then sync the two.

Of course, the mobile version of Vivaldi includes a sync option—just like any modern browser. This sync allows you to keep all of your instances of Vivaldi (regardless of platform) in sync with one another. You can sync bookmarks, configurations, and (yes) Speed Dial tiles/categories.

Syncing your account, which requires you to have a free Vivaldi sync account, is as simple as tapping the V menu button (top right corner) and then tapping Settings. In the resulting window, tap Sync (Figure B) and then log in with your Vivaldi account credentials 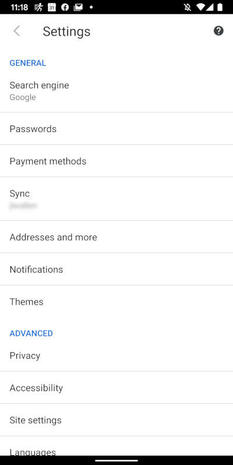 One of the less-than-obvious features is a holdover from the desktop version of Vivaldi. You can select which search engine you want as your default, but the browser also allows you to easily use the other options from the address bar, thanks to search engine nicknames.

For example, say you’ve set your default search engine to Google, but want to search DuckDuckGo for Linux. To do this, open Vivaldi, and type “d linux” in the address bar. After you type the space after the d, you should see the favicon change from Google to DuckDuckGo (Figure C). 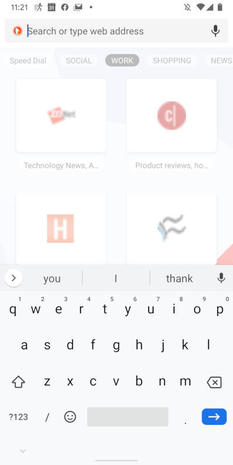 The one caveat to this is that you cannot set your own search engine nicknames in the mobile version, nor can you add new search engines. You might think such configurations would sync with the desktop version, but that is not the case. At least with the beta version, you are stuck with the provided search engines:

Hopefully, when the browser finally arrives out of beta, users will be able to customize those search engines in the same way the desktop version offers.

One nice security feature Vivaldi has added is the ability for users to prevent the browser from saving payment methods. To disable this, go to Settings | Payment Methods and then tap the On/Off slider to the off position (Figure D). 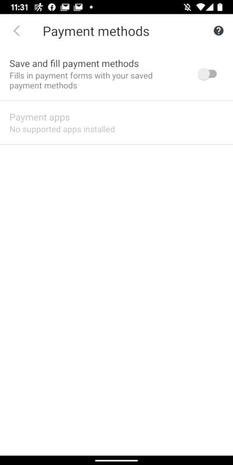 The saving of payment methods is enabled by default. If you’re paranoid about security (which you should be), disable it.

As soon as Vivaldi mobile comes out of beta, you’ll definitely want to install it on all of your Android devices. I haven’t seen a beta browser this impressive in quite some time. Vivaldi mobile has just the right number of features, coupled with a speed and reliability to match any browser on the mobile market.

If you want to try the beta version of Vivaldi mobile, head over to the beta page and sign up.