Wireless earbuds, known as hearables, are fast replacing wearables as the most popular accessory for consumers.

Why Apple’s iPhone 11 may not excite businesses, but expanded focus on health data should
Apple gives iPhone 11, Watch Series 5, and iPad incremental hardware refresh, but services like Apple TV+, Apple Arcade, and a new health-focused Research app are the real story.

The fast-growing popularity of wrist-worn and ear-worn wearables has prompted leading manufacturers to bring big promotional campaigns for new products to the market, and reconsider past designs, as product shipments are pushed to meet predicted consumer demands through 2020, according to the latest report from International Data Corporation (IDC).

And some wrist-wearable users are even looking to a second smartwatch. “They’re upgrading,” IDC Research Director Ramon T. Llamas explained. “If you look at the first generation of smartwatches, we had to accept warts and all, the total experience wasn’t there just yet. But now we’re reaching gen 2 or 3, with a greatly improved experience, and better functionality and capabilities.”

“Glancing at data—like notifications, fitness stats, and even checking the time— remain the popular use case,” Llamas said, “but to be able to interact with the device via smart assistants, scroll easily through data with the rotating bezel like
Samsung’s smartwatches
, or connecting to smart home applications and devices, raises wrist-worn wearables’ utility. Layer on top of this the growing market for applications on smartwatches, and the value of these devices increase further.”

Just in time for first adopters, second smartwatch buyers, and the holidays, Apple announced the
Apple Watch Series 5
, which will further solidify the company’s dominance in the smartwatch market, despite the price point, which starts at $399 for the basic aluminum version and tops out at $1,399 for the Hermes edition. For the rest of 2019, Llamas predicts that Series 5 sales will “go through the roof.” Apple sold 23.3 million smartwatches last year and is predicted to sell 25.9 million units for 2019. 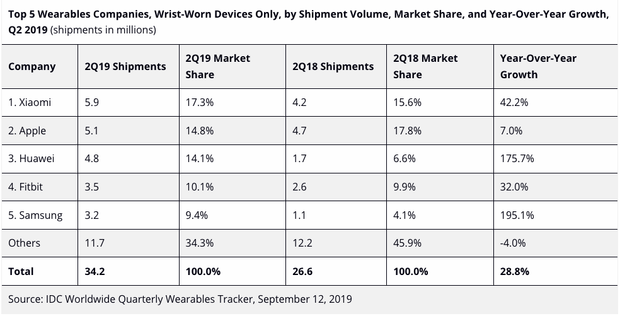 Llamas noted, “If you’re an Apple loyalist, the Series 5 is the watch you’ve been waiting for, but if you’re someone who is on the fence about a smartwatch, you might not want to spend a ton of money. Still, the continued growth is a slow burn, as users who do purchase them realize, ‘I really need this,’ and ‘What did I do without this?”http://www.techrepublic.com/”

The market pioneer, Fitbit, while ranking fourth, combatted the decline in their smartphone sales (credit the bad reception to their Versa Lite) with the newly launched—and popular—Inspire wristbands.

Huawei, which manufactures wristbands bundled with smartphones, has targeted the younger consumer with its Honor brand, but strategizing with an emphasis in the Chinese market has hobbled an international expansion.

Despite its position as fifth in wrist-worn wearables, Samsung achieved the highest growth amongst the top five, and its upward trajectory is credited to the low-cost Galaxy Fit, Galaxy Fit e, and the Galaxy watch. Like Huawei, the company bundles products, but is also one of the few companies with an interest in building cellular connectivity into their wearables.

Meanwhile,
Garmin has a new smartwatch
lineup, but Llamas doesn’t believe the company will extend its reach beyond their core sports-and-physical-activity enthusiast, even for the latest higher-end products. “They’re trying to attract others, but there’s a danger in that—they’ve spent all this time building a brand as the purveyor of activity-oriented devices. They’re known for that, and why leave that? There’s a lot of value in leveraging that as much as you can.”

The wearable on the rise are the Apple-dominated (50.2% share) hearables, defined by the IDC as Earwear/Hearables as the wearables that hang on or plug into the ear. The device must operate wirelessly and provide stereo sound while also including at least one of the following features: track health/fitness (e.g., Samsung Gear IconX), modify audio, and not just noise reduction (e.g., Nuheara IQbuds), or provide language translation on the device (e.g., Waverly Labs) or, lastly, enable smart assistants at the touch of a button or through hotword detection even if the assistant is running on another device such as a smartphone (e.g.,
Apple’s AirPods
and Google’s Pixel Buds). Earworn devices are up 24.8% from last year.

“There are a number of factors coming together,” Llamas said. “You can immediately trace it to when iPhones got rid of the headphone jack. It was radical at the time, but it forced users to get AirPods or compatible devices, and people were realizing ‘Oh, you know what? This works better than wired conventional earphones that come with the phone.”http://www.techrepublic.com/” A notable benefit, he said, is “the ability to manipulate your audio. We could be in a noisy restaurant and I can adjust it to hear your voice over the din of the restaurant. There’s also smart assist built-in with Siri or Alexa.”

The hallmark of hearables, Llamas said, “is quality audio,” but additional features like adjusting audio, smart assistants, as well as health and fitness increase value and utility. “As prices come down, and more features come on board, hearables will become the new normal for earphones.”

We’re not at the point where wired headphones are obsolete yet, though. “But the next piece is that the experience of these [hearables] is better than a conventional pair of earbuds—you have the ability to manipulate an audio profile, hear a richer base or higher notes.”

There will be a huge push on hearables during the holiday season, predicted Llamas, because “the category appeals to a wide swatch of users. At the very base, if you’re an audiophile, you have to have them, but beyond that there are so many other pieces to the experience.” Llamas acknowledged that hearables are “not inexpensive,” and range from $100 to $500, and are not “an inexpensive stocking stuffer,” but eventually, as the PC, laptop, tablets and wrist-worn wearables did, prices will go lower, and he forecasted that “hearables will be the leading type of device out there.” 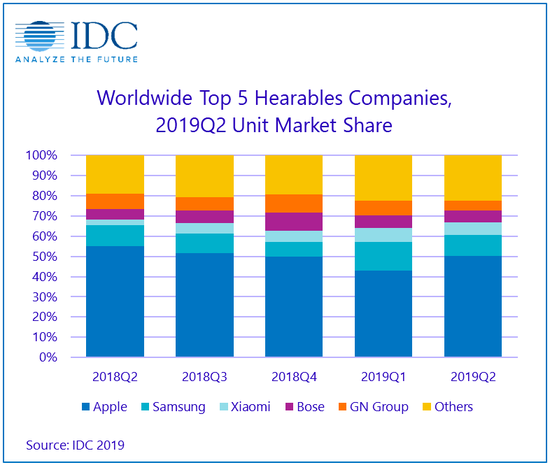 How to get the best deals on Apple iPhone Xs, Xs Max, and XR now that the iPhone 11 is out

What's powering the unlikely rise of the millionaire hacker?