Smartphone sales are predicted to increase in 2020 as a result of 5G, but 2019 will remain flat, with Android seeing increased sales but iOS and Apple’s iPhone still facing challenges.

Is Galaxy Note 10 the perfect phone for power users? Samsung thinks so
Samsung’s B2B Lead and SVP Taher Behbehani talks with TechRepublic’s Bill Detwiler about the new Galaxy Note 10 business features, such as an improved DeX experience, better integration with Microsoft Office and OneDrive, as well as the new S Pen and eventual 5G support.

The smartphone market is showing signs of recovery in the second half of 2019, and is expected to ramp up in 2020 thanks to 5G, according to the latest forecast from International Data Corporation (IDC).

IDC’s Worldwide Quarterly Mobile Phone Tracker indicates that the market will recover as it moves into 2020. Shipment volumes are expected to be nearly flat at -0.4% for the second half of 2019, with market declines of 2.2% for year over year for all of 2019. This would mean that 2019 will be the third straight year of declining shipments. But in 2020, IDC expects shipments to grow 1.6%, showing a slight increase.

“The global smartphone market and relevant supply chains remain uncertain, largely due to fluctuations in U.S-China trade negotiations, making future planning even more challenging than normal,” said Sangeetika Srivastava, senior research analyst with IDC’s Worldwide Mobile Device Trackers, in a press release. “Consumers continue to hold their devices for lengthier times making sales difficult for the vendors and channels alike. However, expectations of aggressive promotions and offers in the second half of 2019 aimed at helping to clear out any channel inventory and get consumers excited about the next wave of smartphone technology should steer the market back toward renewed growth.”

Global economic uncertainty combined with trade and tariff threats are dominating headlines, but there is hope for the smartphone market in the form of 5G. Commercial deployments have reached many regions and while 2019 is an introductory year, 2020 will be a year where 5G ramps up and increases smartphone growth, according to IDC.

IDC expects 5G shipments to reach 8.9% of smartphones shipped in 2020, accounting for 123.5 million devices shipped, and this is expected to grow to 28.1% of worldwide smartphone shipments by 2023.

“The anticipation of 5G, beginning with smartphones, has been building for quite some time but the challenges within the smartphone market over the past three years have magnified that anticipation,” said Ryan Reith, program vice president with IDC’s Worldwide Mobile Device Trackers, in a press release. “To be clear, we don’t think 5G will be the savior in smartphones, but we do see it as a critical evolution in mobile technology. We expect the 5G ramp on smartphones to be more subtle than what we saw with 4G, but that is primarily because we are in a much different market today. The biggest difference is the level of penetration we are at now compared to 2010/2011, specifically in China, the US, and western Europe. The biggest change in our 5G forecast assumptions is that we have lowered average selling prices (ASPs), particularly in China. We also expect a wide range of sub-6GHz 5G smartphones with midrange prices to enter the market in early 2020, if not sooner.”

Android’s
share of the market will grow slightly during the remaining months of 2019, but iOS, the operating system on which the iPhone operates, will see challenges since it is not expected to introduce a 5G model until later in 2020. The
upcoming iPhone 11
that Apple is expected to introduce on September 10 will not offer a 5G version. 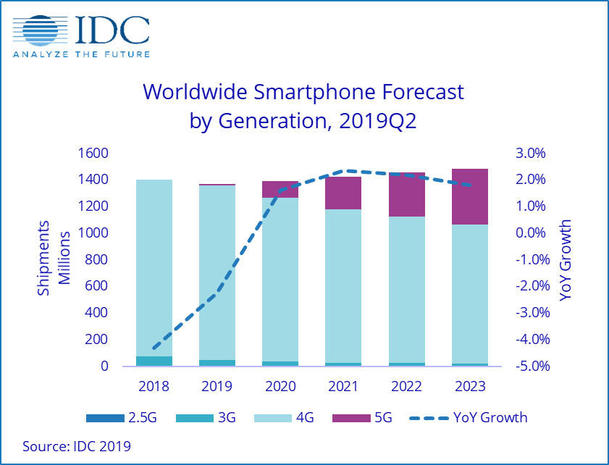 How to boost employee retention through human connection